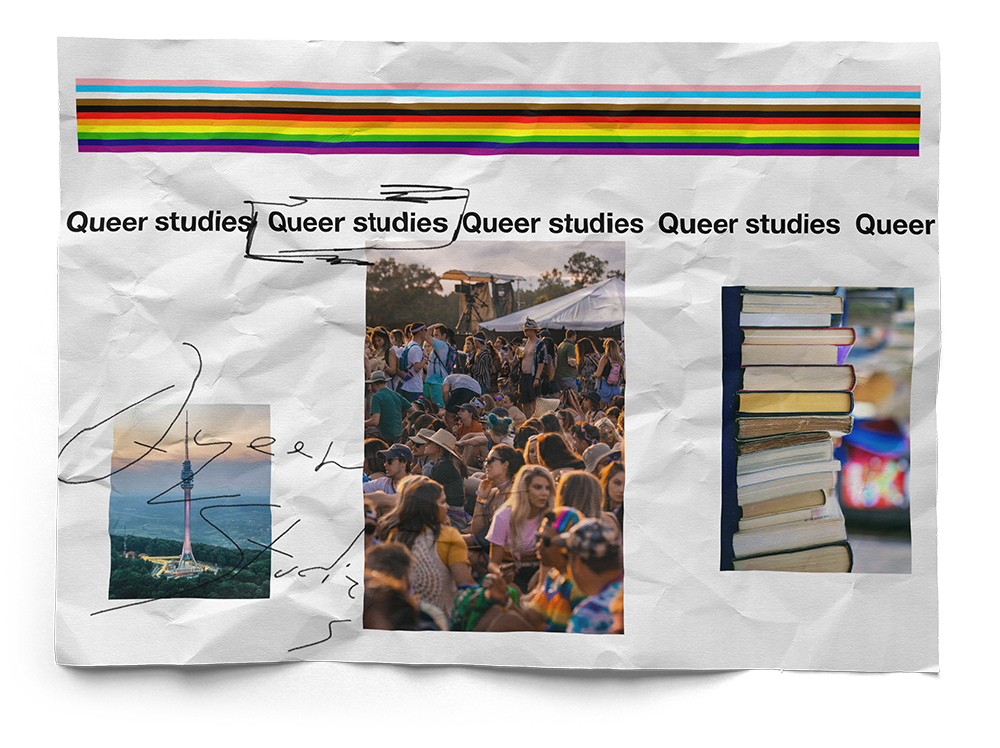 Today, when conservative policies regarding the LGBT+ community are coming from the East in the form of bans on Gay Pride and any “propaganda of homosexuality”, which are increasingly being adopted by the member states of the European Union, as well as from the West, where the right to abortion is gradually being abolished which affects minority groups the most, maintaining Pride as a reminder of the birth of the gay revolution seems more crucial than ever.

The protest walk in Belgrade this year is complemented with art projects in film, theater and exhibitions, as well as a series of lectures and discussions on the current political and theoretical challenges the LGBT+ community faces in 2022.

We will discuss sex work, the emergence of transphobia in left and feminist circles, the relationship between racism and queer existence, non-European third sexes/genders...

Lectures and discussions will be held from Monday, September 12th to Friday, 16th every day at the Institute for Philosophy and Social Theory, Kraljice Natalije 45 – a partner in this project with the Center for Queer Studies – from 5 p.m. in the hall on the 4th floor.

Queerness as Whiteness in the Context of European Gadjo Supremacy

Relying on the Mills’ idea of global white supremacy (Mills 2003) this work is conceptualized on the proposition of the European Gadjo (non-Roma) supremacy as a socio-cultural-economic-political model of Gadjo domination and presupposed European Gadjo privileges. These privileges are defined as a modality of white privileges (McIntosh 1988), as an invisible package of unearned assets Gadjo people acquire by the contingent fact of their birth as Gadjo in Europe. The lecture recognizes and provides an analysis of intersectional conjunction of queer identity and whiteness as one of the problematic positionalities of “good white people”, marking some of the obstacles to antiracism focusing on Gadjo privileges. The paper also investigates potentialities for meaningful engagement in anti-racist practices from this standpoint and contributes to the avoidance of performative solidarity politics and building of substantive Gadjo queer allyship.

Jelena Savić is a Roma feminist and activist from Belgrade, Serbia. She holds a BA degree in Adult Education from the Faculty of Philosophy in Belgrade and acquired her MA in Philosophy at the Central European University, Budapest, Hungary. Jelena’s MA thesis is on dehumanization at the intersection of sexism, racism, and speciesism. Her later academic focus is on whiteness in Europe and Critical Race Theory. In addition, she works on the concepts of European Gadjo supremacy, privileges, and ignorance. In 2019, Jelena published a chapter “Heroines of Ours: Between Magnificence and Maleficence” in “The Romani Women’s Movement: Struggles and Debates in Central and Eastern Europe”, published by Routledge.

The appearance of the two books under the editorialship of Alfred Kinsey on sexual behaviour of human male (1948) and human female (1953) could be taken as a dividing line in American and Western understanding of sexuality. Thanks to mass media the two books brought the issues of sexuality “from the bedroom to the living room and beyond” once and for good. Although some controversy appeared about their motives, Kinsey and his associates presented same-sex attraction among humans, but also among animals, as so widespread and usual that one could hardly reject it anymore as “unnatural” or “anti-social”. The second line of understanding and acceptance of the same-sex human sexual relations came through the anthropological school known as “Culture and Personality”. This school insisted on cultural relativism. Cultures were so different in terms of their patterns that even the idea of “human nature” was debased. The icon of cultural relativism Margaret Mead never publicly revealed her bisexuality, yet she contributed with her theories to both the emancipation of women and to relativisation of Victorian heteronormativity and hegemonic masculinity. Both disciplines contributed largely to the sexual revolution. Among its outcomes the sexual revolution led to demedicalization of homosexuality and to its decriminalisation in many societies that still treated same-sex relations as criminal acts.

Slobodan G. Markovich, Full Professor at the School of Political Science of the University of Belgrade where he lectures Political Anthropology, Political History of South- East Europe and Image of European Other. He has been Research Associate at LSEE/LSE since 2012, and at LSE IDEAS since 2018. He has been the coordinator of annual meetings “Psychoanalysis and Culture” since 2016. His research interests include: Construction of Ethnic/National and Religious Identities in the Balkans, British-Balkan Relations, psychoanalytic anthropology, and History of European Pessimism.

This lecture explores how drag performers in Belgrade refashion memories of socialist Yugoslavia through their performances, and how this witnessing of the space makes way for queer futurities. Since the mid 2010s, a thriving drag scene has emerged in Belgrade. Within this growing scene a phenomenon has emerged, where a small group of drag performers draw on the socialist Yugoslav legacy in their performances. I argue that these performances act as spectral fabulations – post-human apparitions that intervene in the linear temporality of the postsocialist transition, creating utopian imaginings that offer alternatives to the harsh reality of everyday life experienced by LGBTQ+ people in late postsocialist Belgrade. Drawing on my doctoral fieldwork in Belgrade, I examine how drag performers refashion aspects of Yugoslav socialism through their drag practice, queering memory while making space for utopian imaginings, such as mourning. Additionally, I look at how these performances become low histories, which challenge the teleology of the postsocialist transition by making space for multiple potentialities and queer futurities (Blagojević and Timitojević 2018). In doing so I build off scholarship that explores drag beyond its capacity for political subversion (Stokoe 2020), attempting rather to show how Belgrade’s drag performers work with and against their city’s legacies and struggles, to fabulate new ways of being together, and to survive the conditions of the present.

Jill D. Pope is a doctoral candidate in anthropology and gender studies at the School of Social and Political Sciences at the University of Melbourne, and currently a visiting researcher at the Institute of Philosophy and Social Theory at the University of Belgrade. Her research project focuses on drag artists in contemporary Belgrade, Serbia, and how drag performers, identities and performances are entangled with the city’s affective state. She draws on feminist, queer and trans theory to examine these countercultural practices through the dual lenses of critical care and hauntology.

Transfeminist Solidarity – The Future of Resistance to the Anti-Gender Movement

The strengthening of the anti-gender movement in the world is well documented, starting with its narratives, actors, the influence they have, and in the last few years, the flow of money that enables its action, but not yet in our area, although it exists and is gaining momentum. The trans-exclusive part of the feminist movement, which also appeared in the countries of the former Yugoslavia, with the loudest presence in Serbia and Croatia, contributed to anti-gender narratives and the violation of not only the human rights of transgender people, but also reinforcing gender stereotypes and the gap within the already ideologically heterogeneous feminist movement. There are several strong examples of overcoming this gap and contributing to the intersectional feminist movement beyond identity politics. The TransFeminist Platform formed by the trans organizations from the region Trans Mreža Balkan, Spektra, kolekTIRV and Talas, as a concrete example of transfeminist solidarity that transcends borders, is one such example. What are the possibilities, long-term scope and tasks of such initiatives?

Jovan Džoli Ulićević is an activist from Podgorica. He is the founder of the feminist organization Spektra, led by transgender and gender-variant people, and the regional organization Trans Network Balkan. He holds a BA in environmentalism and is a student of international relations and diplomacy. ***

This lecture intends to show how the historical and political context positions TERF ideology as a part of contemporary fascism far from any useful left perspective. The position of TERF ideology as the “feminist” wing of contemporary fascism can be observed not only exclusively through its transphobia, but from the perspective where transphobia is an emphasized and significant part of the whole apparatus of power that it invokes and the feminist concepts which it appropriates. From the perspective of queer theory and social reproduction theory through the examples of concepts of sex and gender, sex work, violence, sexuality, the role of the state and medicine we can see how TERF ideology is at worst analogous to contemporary fascism, or at least invokes a status quo that’s a bit more violent.

Stipe Nogalo. An activist, educator, philosopher, sociologist and a communist. Active for the last four years as an educator in a feminist organization Status M which works on the topic of gender with the emphasis on working with men.

The Short History of the Debate on Sex Work

Most of the discussions and conflicting views on sex work / prostitution that are emerging today have a dynamic and layered history that can be traced to as far as the 19th century. The history of the regulatory approaches to sex work, abolitionist and worker-rights-based, has been embedded in conversations on sexuality and morality, class, public health, social work, colonialism, as well as the construction of nation-states. This brief introduction will give an overview on the development and adaptation of the main perspectives and arguments on what it means to solidarize with sex workers that still continue to shape the contemporary feminist discourse.

The presentation will position sex work as social-reproductive work, which is directly subject to the pressures of capitalist exploitation when it is commodified through the market (regardless of whether it is legalized or part of the gray economy), and indirectly when it takes place within the family in a non-commodified form (as well as care work). It is therefore necessary to examine it beyond moralizing about the essence of “woman” and the sacralization of the body and sexuality. Through the deconstruction of the nuclear family and the function of social-reproductive labor in capitalism, we will try to articulate the connection between the feminist movement Wages for Housework and the contemporary queer-Marxist theory of social reproduction. The aforementioned perspective will help us understand the position and role of the sex industry in capitalism, but also to look at the criminalization of sex workers beyond sexual (gendered, racialized) repression, in the words of sex worker rights activist Morgan Merteuil: “begin to see it as a kind of repression that fundamentally serves specific economic interests which are secured through sex, class, and gender dynamics”. Karlina Hrga is a cultural worker, translator, editor of the portal Slobodni Filozofski and coordinator of the conference part of Subversive festival. Research fields of interest: feminist political economy, queer Marxism and theory of social reproduction.